Located in downtown Cleveland, Metropolitan at The 9 is a member of Marriott’s Autograph Collection Hotels. This iconic hotel is one of the newest in Cleveland and offers residential living space in addition to guest rooms. Hotel guests and residents enjoy access to a full workout facility and yoga studio, theater space, nightclubs, an indoor dog park, luxurious lounges, and restaurants that offer modern cuisine. With residents including celebrities and professional athletes, Metropolitan at The 9 required strict, precise control of access to areas within the property for its guests and residents.

With Kaba’s Saflok Quantum Hotel Locks on room doors and Otis Elevator Compass Destination Dispatch installed, Metropolitan at The 9 sought a provider to connect the Saflok and Otis Compass systems in order to integrate them into one seamlessly functioning security platform. braXos’ Steward software was able to deliver this solution and enhance the hotel’s internal security technology to a new level of sophistication.

Since its establishment in 2014, Metropolitan at The 9’s management endeavored to typify what a modern hotel should be. braXos was involved in integrating the Saflok and Otis systems during the hotel’s construction so that the implementation of the software was ready when the hotel opened its doors for the first time.

Challenge: To create the highest level of hotel security by allowing or disallowing access throughout the property for guest, residents and employees, achieving this through software integration between the Wireless Electronic Key System and Elevator Dispatch System at Metropolitan at The 9 property. Additionally, the hotel wanted to provide each guest with only one keycard that could perform everything the guest needed in terms of accessing allocated areas.

Value Added: Thanks to Steward’s Saflok-Otis Compass integrated solution, Metropolitan at the 9 delivers a highly secure guest and living environment. 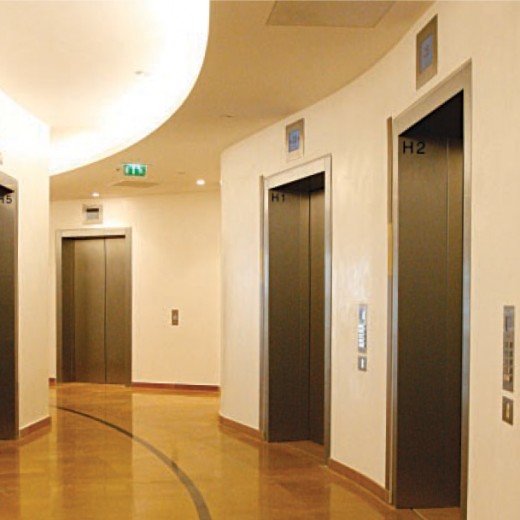 “The goal of the integration was simplicity. We wanted one keycard per guest that handled everything. With this integration, we can easily control guests’ access by making changes in our backend system; guests don’t ever need to exchange their keycards,” said Mike Demitrieff, IT director at Metropolitan at The 9

“There were only a few days for me to test the system and make sure that the Steward Saflok-Otis integration worked. The system was running in the first few days of operation, with software developed by braXos working without a hitch,” said Mike Demitrieff, IT director at Metropolitan at The 9. Demitrieff was largely responsible for deploying the IT infrastructure, including its property access system. “We needed a way to separate our guests from our residents. The Saflok-Otis integration done by braXos allows us to do this.”

braXos’ Steward software enabled the distinct Saflok and Otis systems to communicate and work together to give guests and residents the benefit of an advanced technological access system. The Steward Saflok-Otis integration intelligently allows guests and residents’ access to certain, pre-established areas.

“With the Steward software, the complex is a smart environment. Guests and residents insert their keycards and receive an elevator that will take them to the correct floor based off of the room programmed through the Saflok system. Guest and resident’s also have access to other specific floors, which is done through the Steward software, creating a seamless experience for anyone staying at The 9,” said Demitrieff. ”We maintain control over where they can and can’t go. Guests and residents are denied access to certain areas of the complex due to the keycards programming.”

When inserted, guests’ Saflok keycards send individual credentials to the hotel’s Steward server, then Steward’s Otis’ Connector communicates with Otis Compass so that the systems work together in a real-time process.

“There’s never a delay. The software that Steward wrote for the Saflok-Otis integration allows the systems to speak the same language. Without Steward, the systems wouldn’t be able to communicate and cooperate to function as they do,” Demitrieff elaborated. Steward’s Saflok-Otis integration has not only been good for guests, it’s been good for Metropolitan at The 9’s operations.

“The goal of the integration was simplicity. We wanted one keycard per guest that handled everything. With this integration, we can easily control guests’ access by making changes in our backend system; guests don’t ever need to exchange their keycards,” said Demitrieff. “The hotel’s access control system has required virtually no maintenance. Since the system has been up and running, it has been very easy to control. With this integrated system in place, configuration is easy and we haven’t experienced any downtime with our elevators or keycards.”